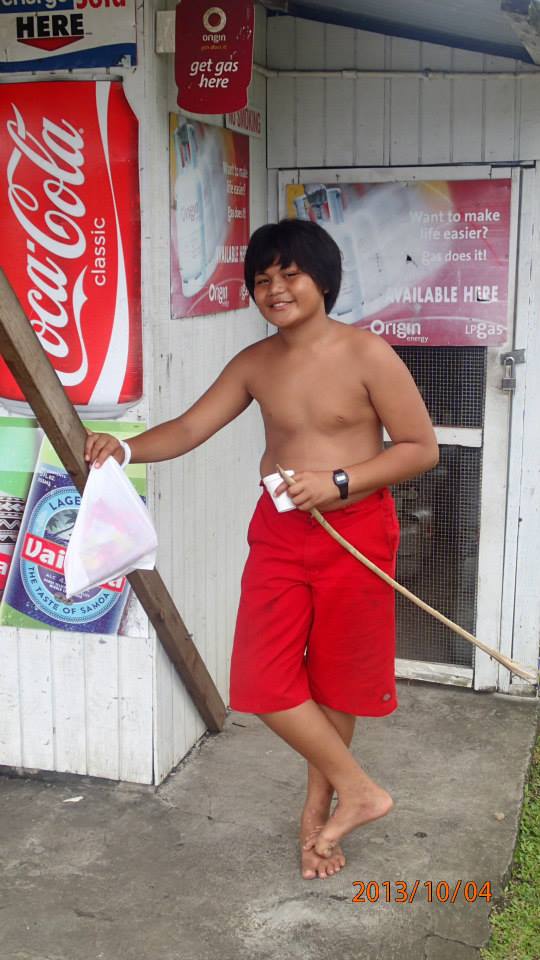 It is awfully difficult for a barefoot school boy to pay attention to his lessons with the Pacific Ocean pounding on the beach just beyond the playground of Mokapu Elementary School. Even with less than half of my attention in the classroom I do remember Miss Wahineaukai teaching us, in her Pigeon-English, about the first Polynesians to settled in the Hawai’ian islands such a long time ago. With no compass or maps, with no written tradition in their culture, they sailed into the tiny island chain—the most remote body of land in the planet—after months in open canoes. Luck, I imagined: like seeds blown from a dandelion, a few found fertile ground but most of them perished at sea. The words of that Miss Wahineaukai that stayed with me through my entire life were “the wayfinders who guided these boats were high priest who had been given the vision and talked to the Gods of the sea. All of the strong kanes who manned the paddles placed their absolute faith and obedience in the wayfinder.” I think she was trying to teach us about discipline but I was thinking adventure.

Yeah! I got that. The only way that I would get in an open canoe and paddle out into the endless ocean for months on end, where I was probably going to die, would be if I had a delusional faith in the man at the helm. These Polynesian dudes were crazy—or driven by something that I had yet to understand, something in the seductive call of the Pacific Ocean.

Samoa is the heartland of Polynesia. It was from the Samoan islands, just below the equator and half way between Honolulu and Auckland that the Polynesian people, “the most remarkable seafaring people in

history”(1), sailed forth to become the Māori of New Zealand, and the first human visitors to Easter Island. It was from Samoa that they migrated to Tahiti and from there on to Hawai’i. Growing up in those islands I came to view the Samoans as the hardcore Polynesians, they were the big guys in the toughest gangs in the schoolyard. They played the hardest: confusing sportsmanship with pain on the playing fields and in the lineup out on the breakers. I also remained enchanted by the great Pacific Ocean long into adulthood and could never shake my childhood impression that the Samoans were the only people to master that vast body of water, the single largest piece of the planet. There came a time when felt compelled to go to Samoa, slide into the heart of Polynesia and climb to the peak of Mt.’Alava where I could see the Pacific’s horizon 360degrees around me; to stand where the high chiefs of ancient Samoa stood and, for some reason, said to each other “lets sail out that way.” I wanted to drink their coolaid; feel whatever mystical pull that made them do it. So I went and what I found out changed my entire perspective, not only about how the Polynesian did it but of the white man’s way of recording history.

Like the big bang that created all of the cosmos no one really knows where the settlement of the Pacific really began but we are clear on where it ended. Ten thousand years ago the Lapita people left New Guinea(2) or the Neolithic Hemudu shoved off of the China(3) coast sailing forth against the prevailing winds and currents in open canoes, crude sails of woven pandanus and planking tied together with coconut rope(4); no more than Tom Sawyer and Huck Finn had when they drifted down the Mississippi in the 1876. By 1,000 CE these seafarers had settled just about every inhabitable land mass in the 30million square miles of the Pacific Ocean(5) that is now called the Polynesian Triangle. In the last phase of this Great Polynesian Migration, when they sailed from Samoa in fleets of up to 100 boats, loaded with chicken, pigs, extended families(6) from where they would establish themselves on every inhabitable island in the central Pacific. The wayfinders who piloted these fleets obviously knew what they were doing. They could only provision their boats to survive 20 days at sea(7) so they would have to island hop their way across the vast ocean. Much of Polynesian folklore is built around the mystical powers of the wayfinders, as Miss Wahineaukai had taught us in fifth grade, but in fact the Great Polynesian Migration owes its safety and success to learn skills and solid science. The critical measurement of successful navigation, points out Jack Lagan, a contemporary navigator instructor, lies not in the discovery of new islands in the middle of the ocean, “rather in the ability to find them agian.”(8) Captain James Cook demonstrated that to the literate world in the late 1770’s. The Polynesian had mastered that skill some 800 years before that. 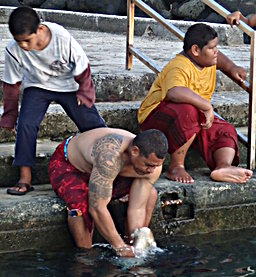 When Cook first “discovered” Tahiti in 1769 he took onboard a “priest” named from Tupaia who was from the distant island of Ratata(9)—confusing, once again, the spiritual title of high priest with the role of wayfinder, which is what he was. Without referring to instruments or charts, Tupaia guided Cook 300nm south to the tiny Polynesian island of Rurta. As sort of a parlor game some of Cooks officers sketched out a chart as Tupaia described the South Pacific from memory, creating what they called “Tupaia’s cranial map.”(10) Tupaia didn’t just know the he names of 70 separate island groups through the Polynesian Triangle “he knew where they were and how to get to them.” You can see Tupaia’s chart today in the Manuscript Collection of the British Library in London(11) and you can see just how accurately it lays out the tiny islands throughout the Pacific. If you were a Polynesian you wouldn’t need a map top find your way around the Pacific—you’d know how to get where you were going without it.

So how did they do it? How did they cross 3,000nm of ocean in open canoes reliably returning to their home island then sailing off again like trains out of Grand Central Station. They had no charts, no compass, no chronometer, no sextant, no GPS, and no written tradition to pass information down to succeeding generations. The “fundamental elements of the Polynesian world: water, waves, clouds, stars, sun, moon, birds, fish and water itself. Bring to that the raw power of empirical observation, of universal human inquiry. The skills of the [Polynesian wayfinder] are not unlike those of a scientist.”(12) Star paths are quite reliable but not always visible. The wayfinders did not perceive themselves as moving towards a point on a chart. Rather they saw their boat as a fixed point with “distant islands moving towards the navigator.”(13) The most reliable constant in the open sea are the trade winds and the swells. If you can learn to distinguish the feel of the prevailing breezes from the constant trade winds and if you can teach yourself to senses the difference between the surface waves and the pull of the deeper current you could find your way reliably to places that were thousands of miles away from each other. Polynesian wayfinders were known to lay in the deck of their twin-hulled wakas for long periods[citation needed] so they could cognate the rhythmic expanding and contracting of the water pressures. A sailor at the helm could then, and can now, reliably keep a boat on course for days by keeping the primary swell pushing consistently against the boats port quarter* Long before an island is visible the keen wayfinder can feel the reflected swell pushing off of the land mass and, similarly there is no metaphysical spirit involved when they sense a refracted swell, the back wash of a land mass they are sailing past.

Then there are the clouds and/or fog that form when the moist air over the sea rises when it blows into the solid mass of an island; and the birds. All seafaring people know that large Frigate Birds feed far out to sea, up to 70mn from land and smaller birds like the Brown Noddy can’t make it more than 20mn offshore.(14) The smaller the bird the shorter the shorter the feeding range therefore the closer to land you must be. Crossing the Pacific in an open canoe is a daunting challenge, but, like a mountain climber that can see the peak overhead, the Polynesians did not have a problem knowing where they were or where they were going. That was a matter of staying tuned into the natural elements of their world.

In yacht clubs and bars overlooking the Pacific today the great debate among sailors, the folks who cross the waters in under sail, is between the old salts who rely on traditional navigation (using sextants, compass, and chronometers) who look despairingly on the young skippers who can’t find their next port without a GPS device. “That’s not sailing,” I hear the old salts complain. “What would they do if their electricity goes out?”

Well, the GPS skippers could do the same thing that the old salts could do when they drop their sextants on the deck, is my answer. They could stick their head out of the companionway and take a look at the world that they are sailing through.

As is should be, the fear of being lost as sea has long been the great deterrent to ocean cruising, and the advent of GPS navigation has changed that significantly. There are twice as many blue water sailing passages being made today than there were in 2006.“In all the planet’s seas, at any given time, there are about 10,000 cruising boats taking long-term transoceanic voyages.”(15) Navigation skills once acquired by the manipulation of esoteric contraptions (like the sextant) and classroom certification are easily replaced with idiot-proof technology: “a GPS trumps a sextant . . . and an iPad makes a fantastic chart plotter.”(16) Personally I find this debate rather moot, at best an amusing drinking conversation. Both the old and new navigation technologies serve to distance us from the natural world that we seek. “The history of navigation is the history pursuit of accuracy.”(17) Jack Logan reminds us and from that perspective it is a matter of putting dots on the map with greater precision. But there is much more to it. Dr. Tianlog Jiao, anthropologist with Honolulu’s Bishop Museum, takes a much grander view of ocean navigation: “The whole story is about migration, but it’s also about diversity, struggle and resilience. It’s about understanding one’s ancestral roots . . . and at the same time realizing that we are all connected.” 18 Wow, and I thought that I was just trying not to get lost out there.

One of the subtle pleasures that I always get after period at sea is the rhythm of the ocean that lingers in the fluid of my body in those first uneasy steps on terra firma that remind me that my body had actually acclimated to a different surface of our planet. I can literally feel that in my bones. And I don’t need a map or a guidebook to tell me that. The more measurements that we use to master the earth the more we lose our feel for the world that we live in.

Photos of Hōkūleʻa used with permission of the Polynesian Voyaging Society.